5 Best MIDI Keyboards on a budget (Available in India)

We show you our picks for the best MIDI keyboards on a budget and how you can go about selecting one! 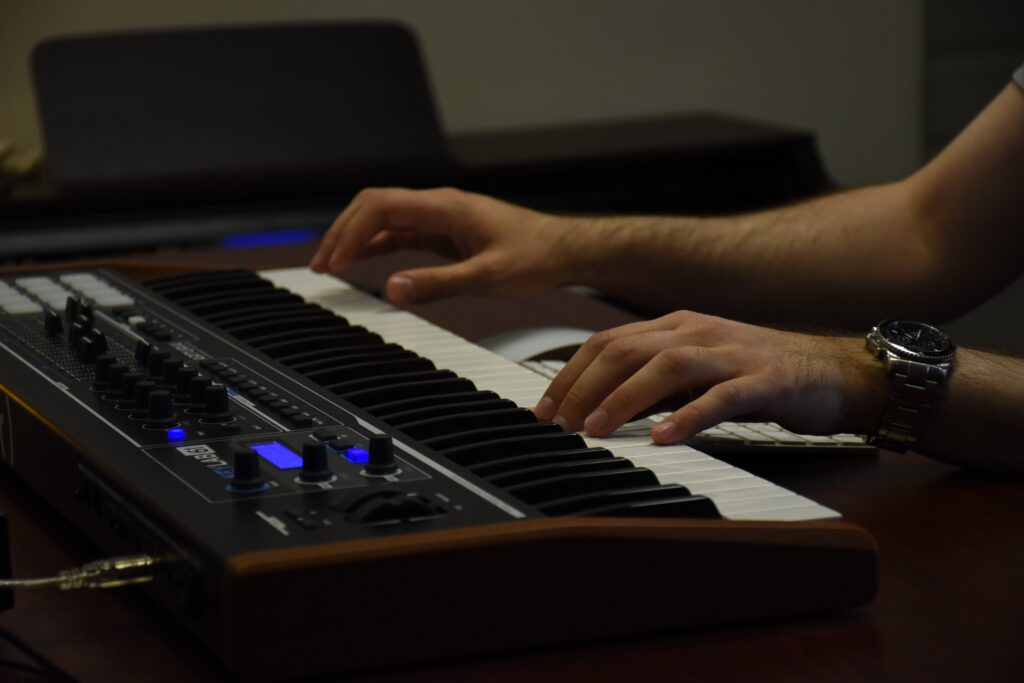 Like any other home studio equipment you would have quite a few choices when looking for the best midi keyboards. But we are here to make sure you make the right call based on your needs.

Needless to say it is always advisable to buy a MIDI keyboard from an established and known brand to have a quality experience. Buying from a known brand ensures you have a consistent experience while getting a faster after sales service.

If you’re just starting out and are confused about what kind of MIDI instrument to buy, your choice could be determined by;

1. Your budget
2. The physical space you have available for the MIDI keyboard and
3. The actual use case of the instrument you are buying; meaning are you planning to use the keyboard purely to interact with software, are you going to be performing live or do you want something just to get started?

If you are unsure about the use case at this stage it would be wise to buy a cheap controller keyboard. As the name implies, a controller keyboard makes no sound of its own, it needs software or other synth modules to produce sounds allowing you to get started for a very low cost. This article lists the Top 5 MIDI controllers later in the article.

So far we have given our picks for Dynamic Microphones, Condenser Microphones, and Studio Headphones. This article would help you choose a budget MIDI keyboard to help you get started on your music production journey. To look for ideal candidates our criteria was succinct;

Our Top Picks for the best midi keyboards

If you want a simple controller that would effortlessly and reliably speed up your music production this is the keyboard to look for. While this MIDI controller does not come with sliders, faders, etc it does have all the essential DAW control buttons, Volume Dial, Pitch Bend Wheel, and Potentiometer.
The overall build of this device is made up of plastic including the keys which are synth action. It is USB class compliant and also works with iPads using the first-party adapter. This MIDI keyboard was designed with a composition workflow in mind and it performs on point. This one aims to complement instead of complicating. 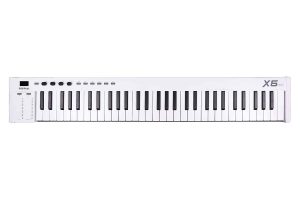 If you want a step up from the previous selection and would want some additional knobs in your workflow the Kadence Midiplus 61 is the way to go. Similar to the Nektar this too is a minimalist MIDI keyboard. Its compact design makes it ultra-portable and is bus-powered via USB. Apart from a USB port, it comes with a MIDI Out port and a TRS port for foot pedals. The build of the keyboard is made of plastic but feels sturdy enough for long sessions.

From a leading manufacturer of audio peripherals, this 49 key MIDI controller is compact, minimalist, and gets the job done efficiently. This keyboard features a USB port and a TRS port for a foot pedal and is a plug-and-play device across Mac and Windows. Apart from the transport controls for DAWs, this keyboard features a Pitch Bend Wheel, A Modulation Wheel, A Fader, and Octave Selector.

The Alesis Q49 is a bus-powered, slim, and cheap MIDI keyboard with four octaves of full-size keys. It features a pitch bend wheel, modulation wheel, an assignable slider, and three buttons. Along with the USB port, it also features a MIDI out port which is fortunate for people who have older electronic gear.

One of the few keyboards made specifically to be used with an iPad. The Samson Carbon 49 is a cheap MIDI controller that is built well too. Aesthetically the pearl white finish does exude a sharp look. This keyboard features a pitch bend wheel, modulation wheel, a slider, and a knob apart from octave switches. Overall a decent built keyboard that comes with a place to rest your phone/ iPad. Features a USB Port

Things to keep in mind before buying a MIDI Controller

A. Number of keys

MIDI keyboards come in all shapes, sizes and lengths. The number of keys correlates to the number of octaves you can play at once. Usually starting at 25 Keys. In this article we’ve picked some amazing budget options for 49 keys and above. The number of keys enables you to move across a wide note range.

B. Size of Keys

Now coming to the size of the keys, while mini keys would save some space on your desk or stand; people with large hands would find it to be very fiddly. If you are going to station the keyboard in one place I’d recommend full size keys.

Generally, MIDI Keyboards are based on their Keyboard Action; what this means is the internal mechanism by which the keys work to move and produce the desired result. There are mainly two types;

Traditional ones derived from the European piano-based key structure and Non-Traditional which expands the possibilities of interfacing with music. Usually non traditional controllers are preferred by those who want to experiment with portamento, polyphony or drummers who would be advantaged by Pads rather than keys. In traditional keyboards, the sensor type determines the level of accuracy captured by the device for the various parameters.

Extra control surfaces on a keyboard make it easier to modulate or control software synths more precisely to get the desired sound. If you are only thinking about using the MIDI controller as an input device the standard piano layout would do just fine but if you do want to step up using a hardware knob/ fader/ slide/ encoder wheel gets you accurate control of the onscreen software synths. You could also eventually get a secondary keyboard just to control modulation etc.

E. Availability of the MIDI Out port and Pedal Inputs

Most modern keyboards are usually interfaced via USB but some of them do come with a 5 pin MIDI out port to help you control legacy MIDI instruments. Most keyboards/ controllers do come with a TRS jack for the sustain pedal which is essential to hold chords while playing melodies.

A multitimbral keyboard lets you play different timbres or sounds at the same time. This is a rare feature for a physical keyboard but can be easily achieved on your DAW of choice. Polyphony is the number of keys that can be pressed simultaneously to produce a tone. It could be six notes being played at once or with a set delay between each of them.

MIDI stands for Musical Instrument Digital Interface and is a communication protocol used as the name suggests to communicate signals from a musical instrument to a computer, electronic instrument, or other music peripherals. It is mainly used to create, edit and record music.

However, since its conception MIDI has evolved to function in various workflows where standard button clicks aren’t sufficient or efficient enough to perform a task. MIDI carries event messages, data that specify information for music this may include; notation, pitch, velocity, panning, vibrato, the clock signal for tempo, etc. MIDI data has its file format which is usually small in size. This is also because MIDI isn’t an audio signal but a protocol or standard used to transfer information.

MIDI data can be transferred by a 5 pin MIDI cable or in recent times through a USB cable. The data is usually transferred to a digital audio workstation or a sequencer. Since MIDI is a data format and not an audio recording, what was originally performed and recorded as a Piano can be manipulated to sound like any other acoustic or electronic instrument or sound sample. Before this became the standard protocol electronic instruments could not communicate with synth modules, other electronic instruments or computers. MIDI was standardized in 1983 by a panel of music industry representatives called the MIDI Manufacturers Association. In 2016 The Music Manufacturers Association established The MIDI Association to support the global community and to keep updating the protocol as technology evolves.

Hence MIDI is essential to a modern-day music production workflow giving access to powerful tools in the hands of those who want to work, play or create music. In recent times the usage of MIDI has however evolved since it is a protocol that can be assigned to keystrokes, mouse movements, or even macro commands making a lot of complex workflows quite easy to handle.
I personally use a Launchpad Mini as a cheaper Elgato Stream Deck alternative and since it can store pages of data, I am able to program shortcuts and macros application wise.

MIDI devices usually come with Knobs, Faders, Sliders, Beams, XY Controllers, TouchPads apart from buttons. As MIDI mainly records Event sequences it is now easier to record and save precise sequences of events that run in sync with other equipment. The easiest example would be that of a live music show/ concert where video, lights, and special effects can all be controlled by MIDI devices all communicating with each other.

MIDI devices come in all shapes, sizes, forms, and functions. MIDI is powerful not only for music production workflows but wherever one would need a smaller communication protocol that executes based on time and events. Let me tell you one thing, once you’ve discovered the power of using MIDI possibilities truly become endless. 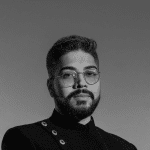 ** Jam Circuit is a participant in the Amazon Services LLC Associates Program, an affiliate advertising program designed to provide a means for sites to earn advertising fees by advertising and linking to amazon.in

Here is an overview of some of the best jam rooms in Lucknow offering a variety of professional services for the busy musician.

Here is an overview of some of the best jam rooms in Ahmedabad offering a variety of professional services for the busy musician.

Here is an overview of some of the best jam rooms in Jaipur offering a variety of professional services for the busy musician.

Here is an overview of some of the best jam rooms in Chennai offering a variety of professional services for the busy musician.

Here is an overview of some of the best jam rooms in Kolkata offering a variety of professional services for the busy musician.

Here is an overview of some of the best jam rooms in Hyderabad offering a variety of professional services for the busy musician.

Jam Circuit is a music business directory and blog to help musicians find the best products, get tips about how to market their music and succeed as a musician.

Here is an overview of some of the best jam rooms in Lucknow offering a variety of professional services for the busy musician.

Here is an overview of some of the best jam rooms in Ahmedabad offering a variety of professional services for the busy musician.

Here is an overview of some of the best jam rooms in Jaipur offering a variety of professional services for the busy musician.

Here is an overview of some of the best jam rooms in Chennai offering a variety of professional services for the busy musician.

Here is an overview of some of the best jam rooms in Kolkata offering a variety of professional services for the busy musician.

Looking to get your song mixed?

We are here to help you! Pricing starts at 8k per song. Get in touch below, let’s discuss your requirements and let’s make your next song absolutely slam!

– Visit your My Account section via the button below